Ah yes, the venerable old VAX line of computers sure brings back memories, very pleasant memories. I started my career on the even older PDP-11 line, but moved to the VAX when it began superceding those old systems. Even today, I have yet to find an operating system and hardware combination that was so perfect as the VAX. Here is a short history, just for old times sake.

In early 1975 a team was put together to create a new machine intended to replace the older PDP-11 series of computers. The PDP-11 line was doing great and was the mainstay of Digital Equipment Corporation’s line of equipment, but it was time to create something new and more powerful.

The VAX was released on October 25, 1977 at the Digital Equipment Corporation’s Annual Meeting of Shareholders. It was the first commercially available 32 bit machine and was a major milestone in computer history.

The VAX and it’s operating system VMS (later renamed OpenVMS) were revolutionary in many ways. In addition to it’s 32-bit architecture, this was the first machine/operating system combination that was designed from the ground up. This produced an incredibly well-meshed system that worked extraordinarily well and lasted for a long time. In fact, the VAX machine was designed to last from ten to fifteen years. 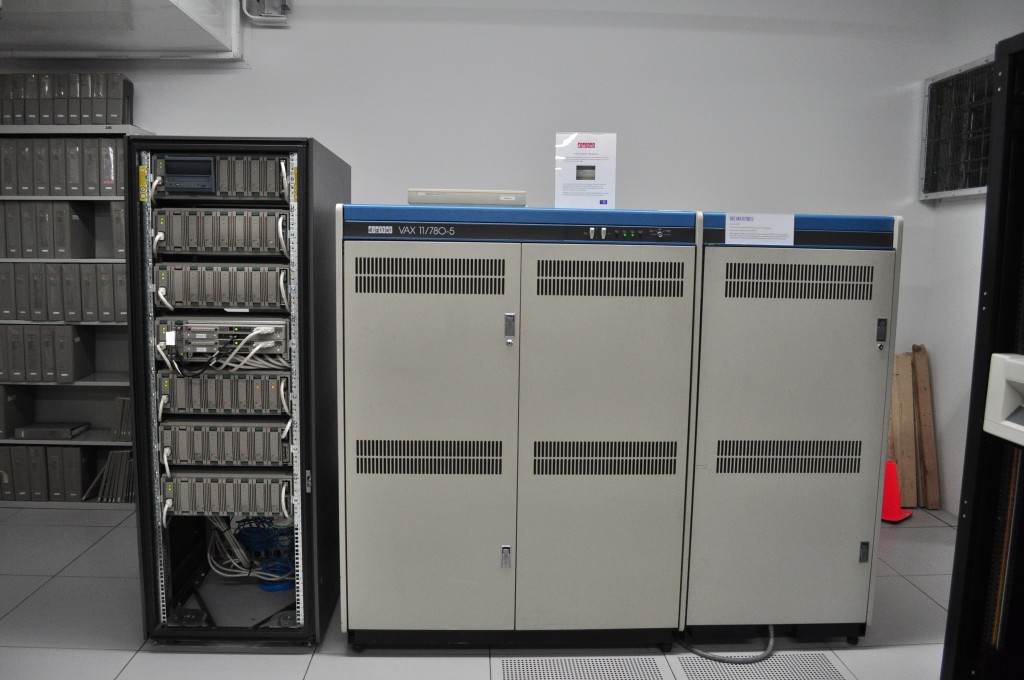 This is a VAX-11/780. It could perform at one million instructions per second (huge at the time).

The first VAX-11/780 got installed at Carnegie Mellon University. In 1978 it was installed at CERN in Switzerland and the Max Planck Institute in Germany.

Within a few years, Digital released the VAX-11/750 systems, which were designed to replace the high-end PDP-11 computers. Since Digital also provided an upgrade path via compatibility mode, many customers switched to the newer hardware. 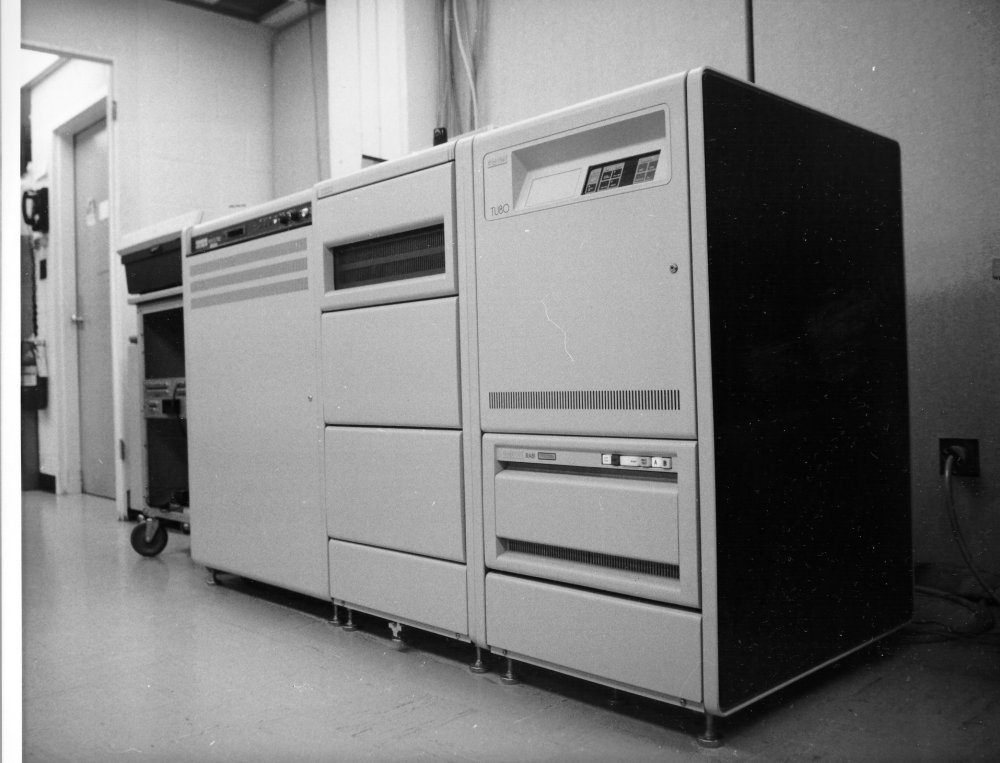 In 1980 Version 2 of VMS was released. In this year VMS reached 1,400 sites, which was quite a large number of sites at the time. 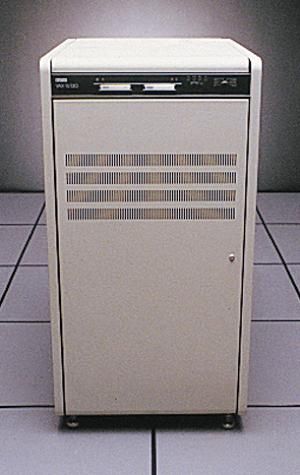 In 1982 Digital released the VAX-11/730, which was even smaller than the VAX-11/750. This was the third member of the VAX line, and it was really just a scaled down version of the previous two machines. But it was a lot cheaper and appealed to a larger base of customers.

A large number of users who attended the 1982 and 1983 DECUS (Digital Equipment Corporation Users Society) events came away feeling lost and angry due to the announcements that the respected PDP-11 line was being discontinued in favor of the VAX. I remember these days as very angry times for many of us in the field. We had grown to love RSTS/E (the PDP-11’s flagship operating system) and felt betrayed by the decisions to cancel it. Due to the overwhelming emotion Digital “reversed” itself, saying it was not canceling the line after all. But we all knew it was just a matter of time.

That actually turned out to be fine, as VMS was becoming a mature, well designed operating system. It borrowed many good concepts from RSTS/E and RSX (the two primary PDP-11 operating system) and built upon them to produce an even better system. This is much the same way that Windows NT borrowed many of it’s design concepts from VMS (as it turns out, Windows NT was designed by many of the people who created the VAX line). Many of us in those days felt that RSTS/E was a better operating system, but the truth is that VMS matured into a beautiful product. 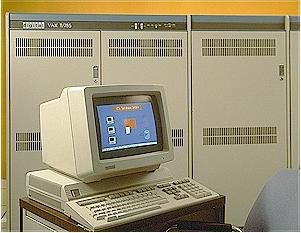 After the VAX-11/730 came out, customers demanded a more powerful VAX. Digital responded with the VAX-11/782, which was two VAX-11/780 processors sharing the same memory. This was followed by the VAX-11/785 system, which ran much faster. 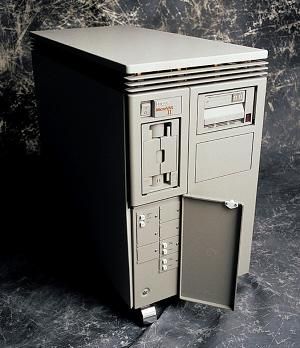 I’ve spent many years working away on the MicroVAX II machines. They were reliable, sturdy and extremely well designed. At the time, in the mid- to late 1980’s, this was the machine to get, as it could support almost anything needed by a business without the larger cooling and electrical requirements of the larger VAX systems.

The systems became even smaller when Digital released the Vaxstation 2000, which cost less than $5,000 per machine! At the time this was an incredibly low price for the hardware and software that was provided.

In 1992 Digital released the Alpha, which was a 64-bit RISC (reduced instruction set) machine which ran a modified version of VMS called AXP. This machine was fast – in fact, it broke many of the speed and performance records in place at the time.

In the mid-1990’s, VMS was renamed OpenVMS and supported standards such as OSF/Motif, POSIX, XPG4 and DCE.

Unfortunately, Digital Equipment Corporation was sold to Compaq in 1998. The VAX line is now thoroughly dead, and the Alpha running AXP is equally dead. Many customers still run both sets of hardware, but it is only a matter of time until those machines are no longer supported or maintainable. Of course, Compaq will continue to provide support for several more years, but the writing is on the wall. The VAX is dead, Long live the VAX!

Sigh. well, those where the days. I could go on and on about how great and wonderful this technology was, and about how much fun it was to write device drivers, disk defragmenters and file utilities for this platform. Perhaps a future article will go into more detail.

Sometimes people seem to make a choice between making their site pretty for search engines or making it useful for people. I am always fascinated when I hear this discussion. In fact, it is interesting to hear someone say "I'm removing my Webring because Google will get annoyed" or "I'm deleting my links page because god, uh, Google, won't like it", or "search engines don't use meta tags, so I took them all out". These comments all ignore the basic datum about the internet. It's about PEOPLE! The internet is not about some silly, stupid little robots, or some faceless idiotic rules enforced by their creators. The internet is about communication.

Yes, search engines are a part of that communication, as it is one (and only ONE) want of getting people to your site. But there are an infinite number of other ways to get people to your site, from viral marketing to Webrings to link exchanges to contests to newsgroups to whatever else you can think of.

But if your site does not cater to PEOPLE, it will fail. Period.